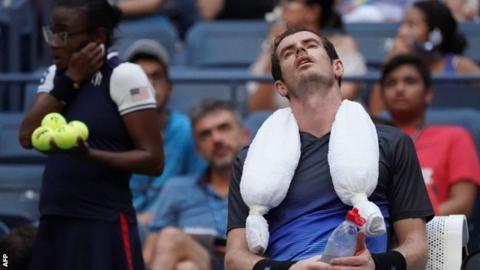 Andy Murray fell in the first round of the Western & Southern Open on Monday.

Andy Murray’s return to Grand Slam tennis ended in a four-set defeat by Spanish 31st seed Fernando Verdasco in the US Open second round.

In sweltering conditions, Murray, 31, battled hard but did not have enough to overcome 34-year-old Verdasco.

It was only Murray’s fifth tournament back since having hip surgery in January.

The Scot looked exhausted at times during a physical encounter on a humid Arthur Ashe Stadium – likely to be a combination of the conditions as temperatures rose close to 100F (38C) and his lack of five-set matches since being sidelined through injury.

But he continued to show the dogged determination that helped him win three Grand Slam titles at the peak of his powers, pushing Verdasco to the limit before succumbing to a third match point in three hours and 23 minutes.

Despite defeat, it was arguably his best performance since returning to the ATP Tour in June.

Murray, now ranked 382nd in the world and unseeded, had the fortune of avoiding a high-ranked opponent in the first round, battling back to beat 448th-ranked James Duckworth – the Australian also on the road to recovery after long-term injury – in three sets on Monday.

That pitted him against two-time US Open quarter-finalist Verdasco, described by Murray as “never an easy guy to play if he’s on his game”.

Murray said he expected Verdasco to test his movement – and the Spaniard did exactly that.

Verdasco pushed and probed with his forehand in the early stages of the first set, breaking Murray’s serve to lead 2-1 before the Scot dug deep to instantly strike back.

Seemingly beaten in a baseline rally at 30-30, Murray continued to retrieve and turned the point around to win a 26-shot rally.

The pair traded break points again in the sixth and seventh games before Murray missed a set point at 5-4 when Verdasco rescued it with an ace out wide.

That proved pivotal as Verdasco grabbed the momentum to break in the next game and hold out for the early advantage.

Murray was undeterred, however, breaking for 3-1 in the second set as Verdasco’s service game began to unravel.

The pair exchanged breaks again as Murray moved 4-2 ahead before the Spaniard produced a double fault on set point to ensure the match would go to four sets at least.