The long-awaited corruption trial of Benjamin Netanyahu is due to open in Jerusalem, where he will become the first serving Israeli prime minister to face criminal prosecution.

Netanyahu is required to appear for Sunday’s session in Jerusalem District Court, a week after he was sworn in to a record fifth term as head of a unity government, ending more than a year of political deadlock in the wake of three inconclusive elections.

In the most serious case, he is accused of promoting legislation that delivered hundreds of millions of dollars of profits to the owner of a major telecom company while wielding behind-the-scenes editorial influence over the firm’s popular news website. 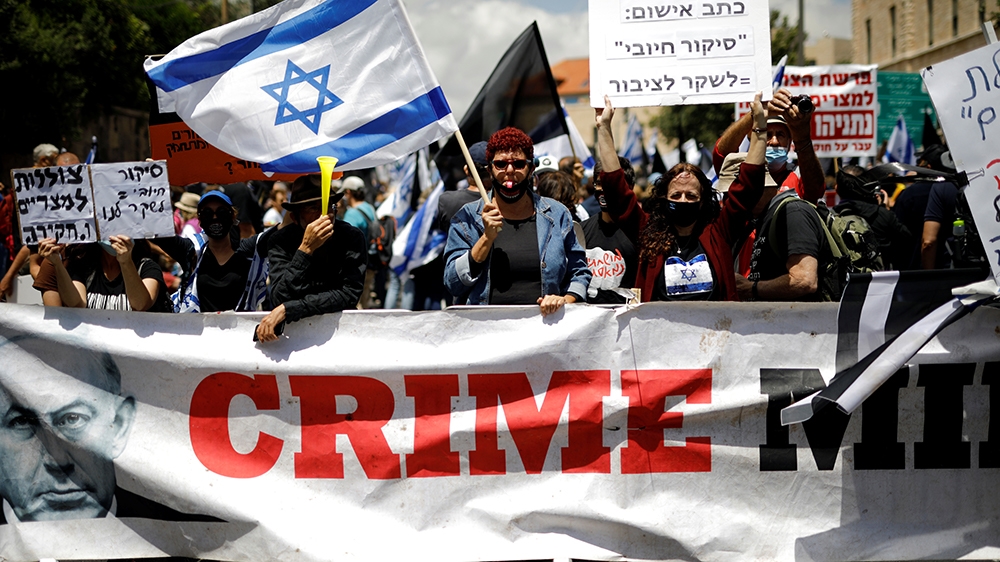 Protesters demonstrate against Netanyahu just before his corruption trial opens.
Netanyahu, who heads the right-wing Likud party, denies all charges. He has cast his prosecution as a left-wing witch-hunt meant to overthrow a popular right-wing leader.

As prime minister, Netanyahu is under no legal obligation to resign and he has said his court battle will not affect his ability to do his job.

Al Jazeera’s Harry Fawcett, reporting from occupied East Jerusalem, said the opening of the trial on Sunday was mostly procedural.

“What we expect to hear today are the charges being recapitulated and read to Netanyahu,” he said.

“We may also hear arguments from the rival legal teams revealing what kind of evidence is available to the defence,” Fawcett added.

Meanwhile, hundreds of people on Sunday took part in rival protests in favour of Netanyahu and against him, shortly before before his appearance at the court.

A three-judge panel, which will hear the prime minister’s case, turned down on Wednesday his request to stay away from the opening session.

In asking to be excused, Netanyahu called the event a formality and argued that bringing his contingent of bodyguards would waste public funds and make it hard to comply with physical distancing rules.

Some critics said Netanyahu was trying to avoid the optics of a prime minister sitting in the defendant’s dock. Turning down his request, the court said it was important for justice to be seen to be done. 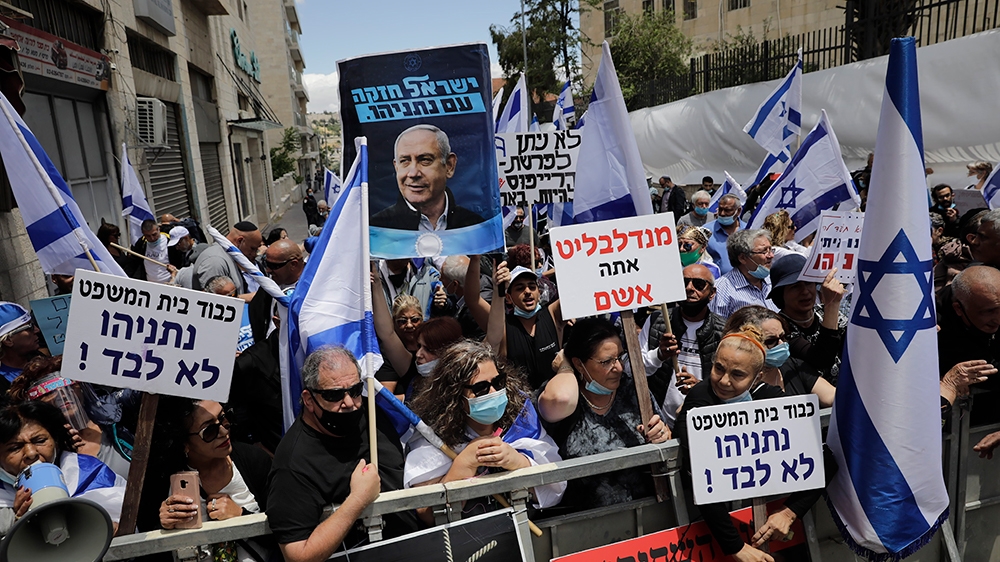 After three bruising elections over the past year, Netanyahu was sworn into office this week for a fourth consecutive term.

All three elections were seen as referendums on his fitness for office, and all ended in deadlock. After the most recent vote in March, his rival, Benny Gantz, appeared to have mustered enough support in Parliament to pass legislation that would have disqualified Netanyahu from serving as prime minister while under indictment.

However, in a stunning turnaround, Gantz, citing fears of a fourth expensive election and the coronavirus pandemic, agreed to shelve the legislation and instead form a power-sharing government with Netanyahu.

The Supreme Court cleared the way for Netanyahu to remain in power. In a key ruling, it said an indicted politician may serve as prime minister – even though Israeli law requires all other office-holders to resign if charged with a crime.

Yuval Shany, professor of law at the Hebrew University of Jerusalem, argued that there is “a basic incompatibility” between Netanyahu’s role as head of the government and his status as a criminal defendant.

In the latter role, Shany said, the prime minister would be “fighting very aggressively and maybe effectively to weaken the government authorities that are prosecuting him”.

“There is a very serious conflict of interest situation,” he told AFP news agency.

Under their deal, Netanyahu was forced to yield some powers to Gantz, with each wielding a veto over most key decisions. Gantz will hold the title of “alternate prime minister,” and after 18 months, they will swap jobs.

Six years ago, former Prime Minister Ehud Olmert was found guilty of bribe-taking and served 16 months in jail. His trial took place after his 2006-2009 term in office.